It can be challenging to figure out what activities to provide for dogs who are so scared they retreat and hide from the people who have taken them in. Yet it’s important to try. We want to relieve these dogs’ stress, stimulate their brains, and give them opportunities for their behavior, however small, to have positive outcomes as soon as we can. Because fearful dogs often initially don’t do much when people are around, we may also need to give them their enrichment when humans are not present. So, the items need to be safe as well as easy to access. With this in mind, I have compiled a collection of enrichment items that can be easy for fearful dogs to manipulate in the beginning and can increase in challenge as the dogs are ready for more. Together, they also stimulate the dogs in multiple ways. All are safe for most dogs, but care should always be taken to be sure they are safe for any particular individual. 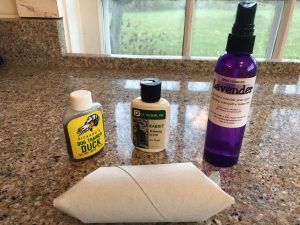 2. Boxes in boxes: Similar to but more involved than the scent tubes is what I call boxes in boxes: putting toilet paper or paper towel rolls, small boxes such as tea boxes, halved egg cartons, etc., inside of a bigger box for the dog to take out and find the goodies placed inside each small container and possibly scattered on the bottom of the large one. Again, it is a good idea to start with an easy version of this activity. Place just a few boxes or tubes inside of the big box, which can be shallow in early trials so as not to inadvertently startle the dog as he or she removes the smaller boxes. Leave the small items open and simple for the dog to both take out of the big box and remove the food. To increase difficulty, add more small containers until the box is packed tight and/or close them so the dog has to put more effort into removing the boxes as well as the food they contain. As with the scent tubes above, you can add to the enrichment punch of this diy toy by including some scents in the individual boxes or the large one. 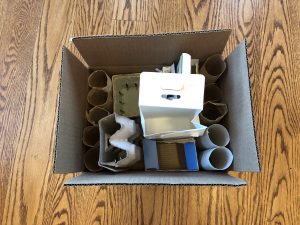 3. West Paw Zogoflex toys: West Paw’s Toppl and Tux Treat toys are clever feeder toys that can be easy for a dog to engage with or difficult, depending on how you use them. The Toppls can be provided individually, with any hard or soft food or treat inside, or a small Toppl can fit into a large one so that the dog has to move them around or take them apart to get at what is contained inside. The Tux Treat toy is oddly shaped and so might require a different approach than the Toppls to get at the food inside, which again can be an easily extracted hard kibble or treat, a combination of hard and soft food or soft food only that the dog might lick out of the toy. Like the Kong, discussed below, these toys can also be frozen for a longer-lasting activity after the dog has had some practice extracting non-frozen foods. If you vary the fillings, you are not only adding to the cognitive challenge of the toys but also amplifying the dog’s sensory experience in terms of taste and textures. 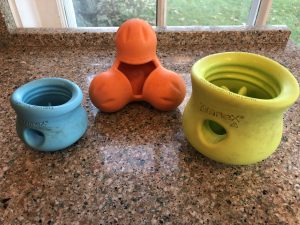 4. Halved antlers: Chewing is a natural canine behavior and one that is easy to provide to even scared dogs. Halved antlers are easier than whole ones for dogs to engage with because the soft middle part of the antler is accessible. In addition to working off some energy through scraping and chewing at the exposed middle, dogs can get an additional taste and scent sensation if you soak worn antlers in chicken, beef or turkey broth before giving them to your dog. Antlers and other chew items also stimulate a dog’s sense of touch with their different textures. Find the ones that work best for your dog and do not skimp on them. 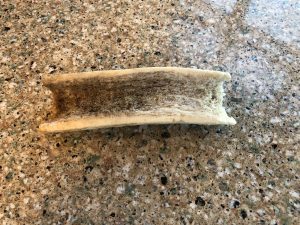 5. PetSafe Twist ‘n Treat toy: Like the West Paw toys above, this toy is easy for a dog to manipulate and can be simple or more difficult to remove the food from. The toy can be adjusted by turning the two halves so that the opening is large or small. The dog merely needs to nose or paw at the toy for the food to fall out. Initially, put dry food or moist treats the dog likes inside of the toy and adjust it so that the opening is quite large and the food falls out easily. As the dog gets the hang of it, decrease the size of the opening. This toy is also a good one to use to introduce dogs to toys that move when manipulated as the movement generally isn’t sudden or surprising, as it can be with some other toys. 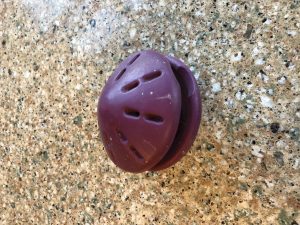 6. Northmate Green Slow Feeder: This one looks intimidating and it may be a toy to provide after your fearful dog has had some experience with the easier items on this list. However, as with the other suggestions, this toy can vary in intensity depending on how you set it up. As mentioned with the scent tubes, place food around the outside the toy at first until the dog acclimates to it. Then put food around the toy’s edges and between its smaller protrusions. As the dog grows increasingly comfortable using this feeder, food can be placed toward the middle of the toy and among the higher protrusions. This feeder can accommodate both hard and wet foods, with the dog licking wet food from amidst the bumps. One strategy could be to put wet food along the edges and harder foods toward the center once the dog has the hang of this toy. While there are other slow feeders that may work better for a particular individual, this one certainly adds variety to the dog’s feeder toy experience. 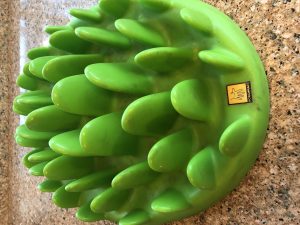 7. Kong: No article about enrichment can get away without mentioning the Kong, an early and enduring feeder toy. I’m talking about the classic Kong, the oblong, rubber one with three bubbles of different sizes, a small hole on one end and a large hole on the other. It is important to start out easy with this toy. Fill it with dry kibble (possibly doctored or mixed slightly with something smelly and yummy) at first so that all the dog has to do is roll it and food falls out. A next step could be to stuff the kong with half dry food and half of the same food moistened so that it takes a bit more effort to get all the food out. A third step could be to fill it with moistened food, although I always put some dry food in the narrow end of my Kongs so that my dogs can remove all of the food from the toy. When the dog has a great history with this toy, it can be partially frozen and finally completely frozen so that the dog has something to work on for quite awhile. Again, this is a cognitive challenge for fearful dogs as well as a physical activity and, depending on what the Kong is stuffed with, a taste and texture sensation. The world is your and your dog’s oyster with a Kong. You can put pretty much anything you would feed your dog in it. Kongs can move unpredictably, so this may be a toy to add in after a fearful dog has had some positive experiences with some of the earlier items on this list, particularly the West Paw and PetSafe items. 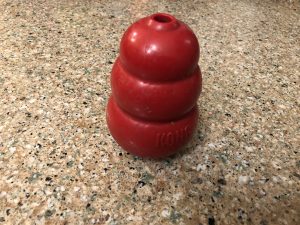 In providing all of the items on this list, natural foraging and olfactory behaviors are prompted and reinforced, and every sense is stimulated. In addition to tasting, smelling and feeling a variety of items, dogs do a modicum of visual tracking of some of these toys as they move and, although the selected items are generally quiet to engage with because noisy, moving things can frighten some dogs, there is still some sound that comes with their use. A dog’s sense of hearing can be purposefully stimulated, though, and should not be ignored in enrichment provision. Playing books on tape and music that research has indicated may be soothing to dogs–certain classical music, reggae and soft rock–may help some fearful dogs to relax or at least partially mask otherwise potentially frightening sounds.

It may seem contradictory, but all animals benefit from establishing routines as well as from having a variety of experiences. By creating routines in providing varied enrichment, we can provide fearful dogs with both, helping them to settle into our homes and begin to live their best lives.

Areas We Serve in Vermont and Massachusetts

Get In Touch With Us